Joined Feb 19, 2009
·
926 Posts
Glad to see that the Gingrich-Limbaugh-oilmen-televangelist conspiracy to drive American ideals toward fascism is being countered by some socialist ideals. I don't have any hope that I will see it in my lifetime, but maybe someday a rational, informed majority will arise, who clearly understand the social-failing of allowing powerful technologies to be used by liars and hypocrites, to sway public thinking toward the installation of a form of government that advantages only the 1% and obstructs or removes the Constitutional rights of all other American citizens. Fascism creates more problems for freedom than it could ever "solve", just like communism.

Maybe we can evolve and switch to a parliamentary democracy, and have more parties, and broader representation, and all the fringe groups could have their own representation, and people who love to hate something could gather around their party boss, and rant and rave together (like a Trump rally), instead of hijacking the center of one party out of only two possible choices. I know... Pollyanna.
P

Joined Feb 19, 2009
·
926 Posts
True, I and others posted long ago, in other threads (maybe this one too, IDK) that the policies and practices of Welfare made it a positive financial event for a poor woman to have as many kids as possible, in order to receive more cash, whether or not they were married to any of the fathers. A family unit (by marriage) should have been mandated, unless there was criminal behavior on the part of the father (felony domestic violence or child abuse, etc). Planned Parenthood strove to mitigate the practice of popping kids out, without regard for the fates of the children, by allowing abortions for drug addicted women and women without husbands.

Many reasons for the troubles in society today. A list of some causes:
The conservative agenda of disallowing abortion, for any reason, resulted in the defunding and closing of many operating PP facilities, so no outside counselling of any kind (birth control, marriage, abortion, adoption, etc) was possible in poverty stricken areas.
The Pop Culture agenda for Women's Rights championed the idea that men were not necessary for raising children... black, brown, white, or whatever.
Entry level jobs for under-educated people (black, brown, white) shrank to almost nothing in the capitalist rush to exploit cheap labor in China (and elsewhere), making higher education a priority. And the 1%er/oil-men's fascist attacks on unions, and the anti-union sentiment stirred up by their pundits, compromised the popularity and opportunity for working in the trades.
Systemic race-hate and fear always made it almost impossible for poor urban black men to find and keep a job good enough to raise a family, so that sports or drug crime (and other gang-related criminal activity) are the only ways for many blacks to gain significant wealth and participate in any part of the "American dream".
All the while, white Christian hypocrites failed to support charities and legislation designed to fight poverty and build organizations designed to oppose injustice and racism, preferring to hide behind their white-privilege and deny the truth.

There is plenty of fault to go around. It doesn't all rest on the shoulders of black men, or black mothers. The stereotypical "lazy/shiftless/ignorant/criminal" black man/woman does exist (as the lazy/shiftless/ignorant/criminal person of any race does), but they have been created at a rapid rate by many more factors than they could solve alone... that is, without the help of a cooperative and sympathetic society. It comes down to all of us are to blame.

Joined Feb 19, 2009
·
926 Posts
Many of us have commented throughout this thread about DJT's financial jeopardy issues, once he is no longer POTUS... looks like the NY AG's office is putting the finishing touches on their future indictment of the Trump family's crimes: Deutsche Bank gave Donald Trump financial records to New York prosecutors – report | Deutsche Bank | The Guardian

Here's a little bit of real humor to brighten up dreary Covid incarceration days, courtesy of the insane clown in office: With COVID Rampaging Across The US, Trump Launches Another Rant About Water And Showers: "If You're Like Me You Can't Wash Your Beautiful Hair Properly" You can't make stuff like this up... if it wasn't happening before our eyes, no one would believe this big a loser could be sitting at the controls of the most powerful nation on Earth (well, maybe second most powerful).

I worry about the days between Nov 3rd and January 20th... what crazy sh*t will the madman do when he finds out he's on the way out... maybe, his staff can keep him occupied with lawsuits against the USA government, its election structure, and the DNC, until he is carried out of the Oval Office on the 20th.

Joined Feb 19, 2009
·
926 Posts
One more thing, it's a good sign for the USA that yet another conservative group has turned away from supporting an idiot, and if the leadership of the GOP were smarter, they would stop committing political-suicide on his behalf: The Reagan Foundation has told the Trump campaign and RNC to stop using the ex-president's image
A 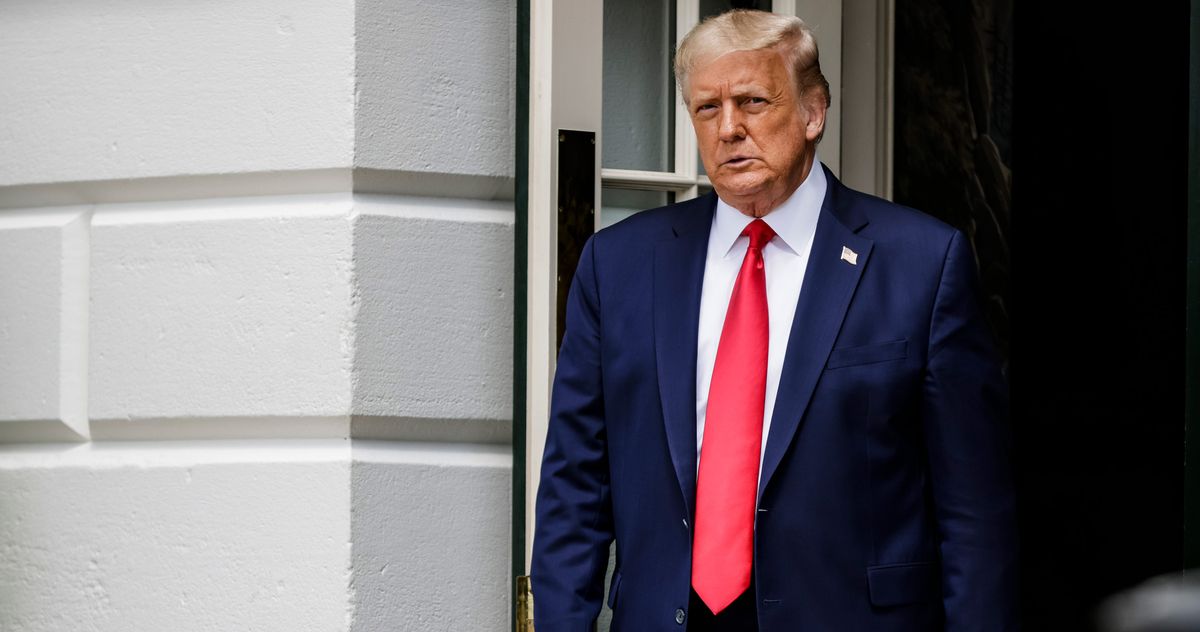 The collusion is happening in plain sight.

Joined Mar 20, 2012
·
16,330 Posts
Reading tonight about the epic fail of Senate R's to even put something forth on a covid package. They have Mnuchin and Meadows doing negotiation and since when does Treasury and chief of staff do that? Like never and not even their jobs to do so. They have whoppingly overexercised authority they do not have, at least in a sane world where people follow the law. R's utterly paralyzed by it all. Gutless worms.

More evidence of a Trump world gone mad, he is so clueless he would let the White House janitor do policy decisions if he wanted to.

The Constitution openly says only CONGRESS controls the disbursement of money, the R's by letting it go have destroyed themselves and their party and never ever can say again they are the party of fiscal responsibility, hell with others doing their work why do we even need them????? Dem's offered one big negotiating cut and MNUCHIN turned it down, where the f-ck was Mitch in all that?? Treasury does NOT TELL CONGRESS WHAT TO DO!!!

Where is the otherwise say it until you turn blue 'rule of law' the R's will give you every time you see one? Trump talks about Portland anarchy and does the exact same thing in DC, if you can't see a Russian plant you will realize it when they walk right in after he has made it possible!

Joined Feb 19, 2009
·
926 Posts
America is going down due to failed leadership by the republican party proxies of their ruling-elite oilmen. And they are getting worked over by their supposed 'fall guy' (DJT), due to saving him from impeachment, and now he has gone further off the rails than they could even have feared... so many quiet voices in the GOP senate, keeping their distance from the crazy one.

Here's a nicely researched and written article about the parallels between DJT and Joe McCarthy... same tactics, same people encouraging them, same 'base' supporting them (always plenty of gullible people and crooks pulling their strings): Joseph McCarthy and the Force of Political Falsehoods

The collusion is happening in plain sight.

Yes, Russia tries to influence US politics and elections, and stoke societal unrest. But this article is very biased. It kind of looks like reporting but it is loaded with opinion.

1st para: “...warning that Russia is working to help reelect Donald Trump. Even more important is what this warning unmistakably implies...”

3rd para “In others words, Iran and China are undermining Trump by criticizing him in public remarks.”

The underlined words are just a few instances where the writer is telling the reader how to think.

Overall, the writer cherry picks a few facts and bends it to fit the narrative he is trying to convey. This is a good example of news loaded with “unnamed sources,” editorials, and talking points that people confuse with news and reporting. It's ironic that “propaganda” is mentioned at the end of the article. Too bad the writer hardly has anything negative to say on China.

Pb-foot said:
Here's a nicely researched and written article about the parallels between DJT and Joe McCarthy... same tactics, same people encouraging them, same 'base' supporting them (always plenty of gullible people and crooks pulling their strings): Joseph McCarthy and the Force of Political Falsehoods
Click to expand...

Thanks for the article. Looks interesting and will read it later. BTW, there is a fascinating documentary about Roy Cohn on HBO.

amc49 said:
They have Mnuchin and Meadows doing negotiation and since when does Treasury and chief of staff do that? Like never and not even their jobs to do so. They have whoppingly overexercised authority they do not have, at least in a sane world where people follow the law. R's utterly paralyzed by it all.
Click to expand...

Don’t know who gets the most blame for an intransigent congress not getting a deal done but glad something is being done for the economy. However, the four executive orders provide much needed support to people and the economy:
I don’t care who gets it done but it needs to get done asap. This is not a chicken game like passing the budget every few years. I’m sure this will go straight to courts for legal interpretation but it increases pressure for Congress to get something done. Politics...

Pres Obama started doing executive orders in his second term including those against US law - remember DACA? [no one call me a racist - most of my family are immigrants (legal) and I am still jumping through hoops and paying $ to help my wife of 20+ years become a citizen].


amc49 said:
the R's by letting it go have destroyed themselves and their party and never ever can say again they are the party of fiscal responsibility
Click to expand...

Joined Sep 16, 2017
·
110 Posts
Seems like the biggest sticking point is related to school funding. Figure that shit out later - the money to the unemployed dried up last week and it is needed NOW. Somebody has to start thinking out of the box to get the money flowing. Its not just the unemployed at stake but presumably this money will be used in part to patronize small/medium businesses and keep them afloat - or else there will be no job to ever go back to.

Joined Jul 1, 2018
·
1,072 Posts
The extra $600 a week is too much for some. It's kind of insulting in my opinion to everybody working in a grocery store right now. Somebody not working should not be making more money than somebody working full-time.

I understand why they did it because apparently it's complicated to do anything in government. Somebody in Arkansas who was working at a bowling alley for $9 an hour should not be getting the same as somebody in San Francisco. The extra $600 a week is on top of the state unemployment so it's not completely equal, but you understand what I'm saying.

I'm seeing a ton of looking for help/hiring signs in my area.

Sent from my LG-LS997 using Tapatalk